@michaelreeves808
Michael Reeves is a Filipino-American YouTube personality known for his comedy-engineering videos.

Reeves previously worked as a software developer in Hawaii. His first video, "The Robot That Shines a Laser in Your Eye" posted in April 2017, went viral.

In October 2019, Reeves created a Twitter bot that allowed the public to buy products to decorate his room. The bot purchased the most liked Amazon links in his replies for 24 hours.

Despite not yet being a member of OfflineTV, he would spend a lot of time hanging out with the crew, such as playing hide and seek with them using tasers, joining them on a trip to Japan, and much more.

In December 2019, Reeves modified laser tag vests to contain tasers, dubbing it "Tazer Tag." He used these vests to play a game of capture the flag with the other members of Offline TV.

After much speculation, he was officially announced as a member of OfflineTV in December 2019, signing a two-year contract with the group. Following this, his content would usually involve members of OTV as "test subjects" for his wild inventions.

Around the February 21, 2020, fellow OTV member LilyPichu confirmed that Reeves and her were dating, telling her stream viewers he was her Valentine's Day call and asking him out in the process. Since then, she has confirmed this several times in her other streams. 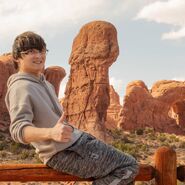